All Posts in Category: public debate

Globalization, and an open-source mentality have changed our thinking almost overnight about what constitutes a copy versus an original. Copying not only has legal and cultural repercussions; it bears on moral and psychological issues as well.

Fear of Being Copied

Every art or design student has likely had some fear of being copied, or that what he creates is actually a copy of somebody else’s work. No designer likes to hear, “your work is exactly what designer x did in the mid nineties (or something similar).” The fear that an idea, form, or material will be stolen by another has the same foundation as the fear that one is “stealing“ (from?) oneself. This fear is completely understandable: the uniqueness of a creation is being threatened by the possibility that someone will copy it. And uniqueness–or call it originality–is at the heart of western European creativity.

The tension that immediately arises when speaking about copying proves its relevance and explosive potential – not only in the field of design. Aside from the formal and juristic consequences, in design there is a “moral of authenticity” that is deeply rooted in western culture. What would happen if we could let go of this ‘authenticity’?

Another issue at stake is the similarity between copying and inspiration. Every designer will study examples of designers that inspire him. Designing is in part copying, leaning, re-using; placing an old idea in a new context. It’s foolish to reinvent the wheel, so we cut and paste from all kinds of  sources of inspiration. And since the rise of the internet those sources are even more accessible: with a couple of clicks we can see everything, everywhere. Instantly.

But the line between inspiration and copying is a thin one. Anyone who breaches that line will be singled out not only by colleagues, but also, inevitably, by lawyers. The western world has installed a huge copyright system in which the copying of intellectual property equals theft. That whole system is relatively young–only about a hundred years old, and some say copyright protections holds us back from innovation and  impedes creativity. It’s common knowledge that in the music industry, the Internet has had a huge impact on the business models of performing artists. Will the same be true for the design sector?

Different Attitudes of Asia and Europe
The question of where inspiration ends and copying begins can be answered from personal, cultural, and moral standpoints, but also from commercial and legal points of view. Cultural differences certainly have an effect on where one stands in this debate. It has always been said, for example, that Asia and Europe have very different attitude towards copying; that originality and authenticity have different meanings in different cultures. In Japan and China, where a totally different ethical code governs authorship, you are considered a ‘master’ if you are able to copy good craftsmanship. Here in the West however, originality is at the heart of design culture.

Legal questions surround copyright culture. How is copyright built? What are the premises?  How do we define a copy from moral, legal, and cultural points of view? Should copying be deplored or could it be also seen as a process towards perfection or the development of skills? Could it be regarded as the predictable consequence of an ever-present marketing, branding and personality cult?

In the likelihood of a future society dominated by copy culture, what changes will we see? Will patents and copyrights lose their raison d’étre, becoming artifacts of mass industrialization? Will they be replaced by open source concepts, appropriation and personalization? What will be the designer’s role in a shared and thus reciprocal relationship with a new, potentially multi-faceted breed of user, client, producer, reseller and co-developer?

The discussion needs to be placed into a wider cultural context, refining and reviewing our views on copying, imitation and inspiration, suggesting entirely different sets of moral values and ultimately proposing updated global economic and socio-cultural cooperation models.

14 Jun , 2012 Leave a comment dutch design, Essays on design, in English, public debate
Leading design teachers Ron Arad and Daniel Charny, who have taught at the Royal College of Art in London and Jurgen Bey, from the Sandberg Institute in Amsterdam, winner of the BE OPEN Prize, came together today to discuss their approaches to education. The talk was moderated by former Professor of design and architecture schools in Berlin and Rotterdam, Lucas Verweij and hosted by BE OPEN as part of their collaboration with Design Miami/ Basel.


Verweij asked the panel to describe what they consider to be the perfect conditions for teaching. All agreed that the ‘studio culture’, ie the learning environment, is a key factor in the development of a student. Always controversial, Ron Arad said that his greatest task at the RCA was ‘unteaching’: “I said that I would be able to make perfectly employable people completely unemployable within two years,” he boasted. But his point was a serious one and picked up by the other candidates who agreed that the key is to empower students to follow their impulses and not to restrict creativity through prescriptive briefs: essentially, to BE OPEN to all the students’ ideas and to creative possibilities.
Daniel Charny said that it is essential to show design students that there are a number of ways of reaching their goals, raising their ambitions so that they keep pushing their ideas forward. Arad agreed and praised the BE OPEN Prize for supporting this way of thinking:”Rather than giving a lump of money to a student or institution, this prize will expose students to the ideas of inspirational experts, giving them the courage to be even more experimental.” Jurgen Bey added that whilst he was delighted that his school, the Sandberg Institute, had won the prize, he had also found it very interesting to see the many different approaches to education manifested in the schools’ presentations in the BE OPEN Installation.

BE OPEN Inside the Academy in Basel has been conceived to draw attention to the importance of education today in nurturing the designers who will shape our world tomorrow. The Talk was organized to accompany BE OPEN Installation and Prize that invited a selection of top European design schools to present innovative design projects by outstanding students currently or recently enrolled. The universities exhibiting at the BE OPEN booth at the Fair are: Le Cambre, Belgium; Ecole cantonale d’art de Lausanne (ECAL), Switzerland; Hochschule Basel, Switzerland; Konstfack, Stockholm, Sweden; Sandberg Institute Amsterdam, The Netherlands and The Glasgow School of Art, UK.
A jury of international design luminaries reviewed the projects of the BE OPEN Inside the Academy Installation. The jurors selected Sandberg Institute to receive the Prize, which grants the winning institution the opportunity to select and host a series of distinguished guest lecturers to further its curriculum development.

Gratis_Tanken translates as  “free gasoline”, but the word “tanken” (as in “gas tank”) sounds just like the Dutch “denken” (thinking). The title is thus very close to ‘Free Thinking’, and that’s what it’s all about. Filling up your tank excites everybody, and in this case, Gratis_Tanken is about mentally refilling your mind.

Gratis_Tanken is an experimental format for public debate. The public is not physically there, but is kept informed and committed in several different ways. Ten years ago, we sent out rich e-mails (at the time a very new concept) with the results of the debates.

Much like with Facebook or Twitter today, the broader public was able to interact by replying to quotes written by journalists who had attended the sessions. Although each Gratis_Tanken session could have a central topic, the format, as the title would suggest, was always most effective for the investigation of free thoughts. 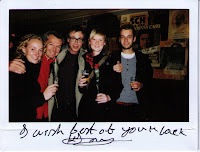 The recent session, a cooperation between the Rotterdam Designplatform and the Boijmans van Beuningen Museum, brought all the nominees of a design prize together. We talked about entrepreneurship, education, and the future of contemporary design.

Personally, I doubted the format would still work, but I was positively surprised. It felt like a dinner with close friends who all understood each other very well. That may sound simplistic, but for a semi-public event it was extraordinary.

In my self-satisfied mood I paid the Polaroid man in the bar we visited afterward. He not only took this picture, but also gave roses to the Dutch nominees Lonnie van Ryswyck and Christien Meindertsma. In the tacky Polaroid photo above, you can see Jeroen Dekkers (DPR) and me in between.

Im memoriam: Ineke Schwartz
The occasion of this publication is a sad one as well: in the first image above you can see that Ineke Schwartz moderated Gratis_Tanken with me. Ineke died of a serious disease more than five years ago. 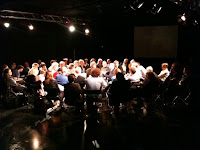 I still miss her, and I know that I am not alone. Ineke was a very good chairman, and a true inspiration to me. I am proud to have worked with her, and she is one of the reasons that I keep on Gratis Tanken.

Meanwhile I have done two more Gratis Tanken, in a slightly bigger group.
In the above picture we are in Breda, with leaders of the cultural sector. In the picture beneath, we are in Schieblock, for an Nai discussion on Traditionalsm.