All Posts in Category: datascape 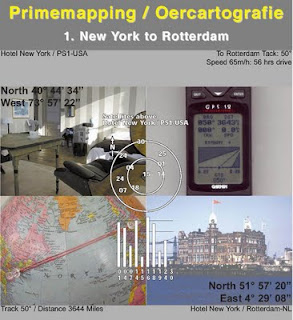 Prime Mapping (project from ’97, part of the Hotel New York project of Jeanne van Heeswijk) goes back to the source of cartography; it is the most naked form of recording positions. It notes an object’s place without interpreting it. Normally maps build on other maps and are therefore reinterpretations rather than autonomous reflections.

But this is not the case with Prime Mapping; through the use of GPS  (which was launched by the US Army), it is possible to document where things are in a completely autonomous way. This report on four journeys has been recorded in Prime Mapping. 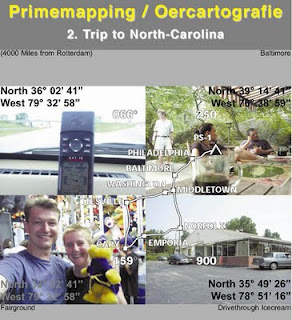 The maps provide no context, coastline or outline of Manhattan. They show only the absolute GPS position. On the basis of this
page shows the GPS satelites above a particular place

The journey to North Carolina passed through Baltimore because we were visiting friends there. We won a bear at a fair – two minutes past the 38th longitude – and on the next day we passed the ‘4000
miles from Rotterdam’ boundary.

On the last day – and back on the 78th latitude – we encountered a friendly-looking ice cream parlour where the owner had knocked together a small extension so as to convert it into a drivethrough. 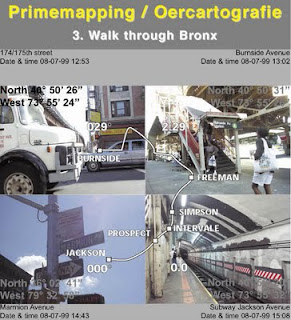 A hike through the Bronx began at the Burnside subway station, passed through Freeman Avenue and ended up at the Simpson Avenue station. From there I travelled in the subway from station to station, using this approach to record the position of several stations.

At Marmion Avenue I suddenly realized that I own the rights to this particular piece of cartographic data. The recording that this street corner is Iocated at that specific place belongs to me. Legally speaking cartography is a complicated matter: you can never own the copyright to a street corner or its position but you can protect the effort that you made to define it. Prime Mapping always belongs to you. 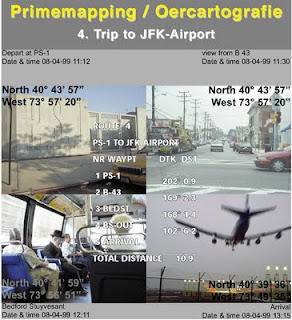 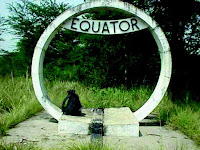 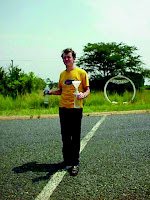 People say that water draining out of a bath or flushing down a toilet swirls in a different direction, depending on which side of the Equator you’re on. Is this true?

In 1998 I went to Uganda, south of Fort Portal and Kasese. Here is a picture of the monument marking the equator alongside the road. It’s not hard to find, since there are only two major roads crossing the equator in Uganda.
I was packed with water, a funnel and a few bottles, and I was ready to see if the rumors were true. I tried pouring the water a hundred times, both north and south of the Equator. I could see clearly that the water went through very fast, but not that it ran in different directions. It was very hot out there, and with every trial I spilled some of the water. I had to try hard not to drink it.

I always thought I had done something wrong, but then the Internet came along, and I found that there are many other people who also doubt this myth. “The idea that water goes in different directions down the plughole in the Northern and Southern hemispheres is almost entirely a myth. The Coriolis effect on the Earth is very, very small, becoming apparent only in large, slow systems like the rotation of the atmosphere,” says Steve Bowers in speculative science in the Guardian.

Andrew from Plymouth comments,  “I have been a seafarer for over 30 years and have crossed the Equator many times, North to South and vice versa.” Never has the direction of the vortex of water in a basin been a subject of discussion. If it were true, surely seamen would have spent many hours observing and then talking about this myth.

My next trip for this project will be to Macapa, Brasil. I want to go to Estadio Milton Correo, where there is a football pitch right on the equator. It actually divides the pitch in two, so if the team chooses sides (after the toss) they are also choosing hemispheres. Here you can see an image inside the stadium. Look carefully at the front of the field: “SO” and “NO” are written in the grass.