All Posts in Category: Basketbar

NL Architects has always made a deliberate show of its Dutch roots. The firm’s name alludes to the most common abbreviation for the Netherlands, and even its logo is the “Dutch badge.” The firm’s homepage displays photographs of its founders in the traditional costumes of Volendam. Whether playfully or seriously, NL aspires to be the standard-bearer for contemporary Dutch architecture.
The four principal founders of NL Architects are Pieter Bannenberg, Walter van Dijk, Kamiel Klaasse and Mark Linnemann, who left the firm at the beginning of 2003. They officially opened their Amsterdam office in January 1997 after sharing workspace since the early nineties. All were educated at Delft University of Technology while living in Amsterdam. Often, their projects focus on ordinary aspects of everyday life, including the unappreciated or the negative, which are then enhanced or twisted in order to emphasize the unexpected potential of what surrounds us. NL Architects currently employs an international staff of six to ten people.

NL Architects added the Basketbar, an amalgam of basketball and bar, to the university site of Utrecht five years ago. It has quickly become a city icon. On the roof of the cafe is a basketball court inside a large, imposing cage that serves as a backstop. NL has previously produced facades in the forms of climbing walls and rock cliffs, so in many ways, this unusual structure is a typical NL building.”Yet its expressive, ironically-charged vigor is somewhat deceptive. The building is certainly no one-liner; it has been designed with painstaking precision and architectonic intelligence.
Walter van Dijk comments, “The Basketbar fits naturally into its location; it doesn’t look like an addition to the building. It nestles into its 1960s setting in a contemporary way. Koolhaas’s plan proposed building up to the property line. We did that. We’ve expanded the existing box to the extreme.” 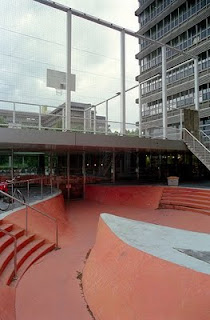 A wolf in sheep’s clothing  .
“A basketball court is a typical icon of urban and black culture. You can’t open a hip- hop magazine without finding it full of the game of basketball – the symbol of urban life and something this campus didn’t have. Basketball is also a spontaneous game; you don’t have to make appointments to play. You can play it alone, as well as with one, two and even four teams. One university board member objected to basketball, finding it too banal. We did some quick research into the origins of the sport and discovered that it was developed by an American professor to give students some relief from heavy intellectual work. Hearing this, he gave in. The basketball court is completely public. It has an ungated entrance to the street. Columns around the court are much heavier than normal, because we didn’t want to use crosses for stabilization. The columns turned out to be large enough to accommodate ventilation shafts for the kitchen. Two columns and the lateral section above now serve as ventilation ducts for the dishwashers, and eight others vent cooking odors. The building appears uncomplicated, but it is a wolf in sheep’s clothing.”
The firm is full of ideas, some of them humorous and ironic. Growing into a flourishing business with a portfolio of building commissions has been slow going, however, and NL still feels like an underdog. Is the architecture world not taking NL seriously enough?

“The name NL Architects was a marketing ploy. We could sense that Dutch architecture was about to boom. But we also had a great deal of respect and affection for the history of Dutch design. And we had recently hired our first Dutch staff member. You start something as a joke, and it fills itself in. We had a list of 1,500 names for the company, and we couldn’t settle on one, because an exhibition abroad was coming up, we chose NL. The bumper sticker is an allusion to the origin of our collaboration: a Ford Escort in which we car-pooled during our years at university.

“We don’t build that much; a lot of projects founder or take an insane amount of time. It’s difficult for a firm of our size to compete for international tenders, because you have to have a minimum turnover and realized a relevant project. Often we don’t make it through the selection process. Clients are afraid we’re going to make something expensive or complicated. You might call it an image problem. But we always work within budget. That’s no guarantee, however, that a project will go ahead. Our main strength is that we can devote a disproportionately high amount of attention to what we do. And, in a certain sense, publishing is almost as much fun as building.”
A conceptual approach is almost a given for Dutch design. A conceptual attitude is mostly regarded as strongly idea-oriented. Does van Dijk consider the members of NL to be conceptual designers?
“We believe in ideas. When making design decisions, it’s important to have an idea to guide you. We like a building that requires only a few parameters to achieve change. We like tight “editing” – you could call that conceptual. By emphasizing a certain aspect of a structure, we can make an explicit statement. That makes a project communicative, and all our work is based on ideas or analysis. The designs follow a certain logic that is rooted in consistency. The results can be not only surprising but also, in some cases, surreal.”